If you were asked who are the most inspiring female athletes and role models out there, what would you answer? What names or characters come to mind?

Personally, I am equally inspired by both male and female athletes. To me the passion for what you do, grit and the message you share with the world matters much more than results.

Luckily, the world of sports, performance and adventure knows no gender. It accepts everyone and anyone is welcome to join the movement. That is the understanding majority of the world accepts now.

However, it hasn’t always been like that. For a long time women did not get the attention they deserve in sport.

To celebrate all the female athletes, I have put together a shortlist of passionate and driven ladies who are changing the world. And sharing their inspirational sports stories in the process.

The following athlete stories are an example of what it means to love what you do and at the same time push the boundaries of what’s possible.

Lindsey is a true champion. Throughout her career she has won everything there is to win in the world of alpine skiing. She is a World and Olympic Champion, a multiple World Cup winner, has been at the global stage for a long time.

But these results is not what makes her one of the most inspiring women in sports.

It’s Lindsey’s ability to recover from horrifying crashes, her courage to get back on the start line and, most importantly, her humility is what make her the icon for perseverance and true sportsmanship.

One particular crash left her with a serious nerve damage in her right hand. Lindsey refers to it as the ‘hardest recovery of her career’. It started with just wiggling her fingers before even attempting to lift a cup of water.

For years Paula has dominated what is, probably, the single hardest physical challenge in the world – the Ironman Triathlon.

Ironically, Paula started exercising to lose weight gained in college, but went on to win the prestigious (and toughest) Ironman Hawaii whopping 8 times (finishing third twice and second once).

Paula is without a doubt one of the most inspiring female athletes. With 24 total Ironman Triathlon career wins, 8 World Championship titles and a World Record that stood for 14 years she is considered by some as the ‘Greatest Triathlete In History’ and has become a true icon for the sport that requires a lot of ‘pushing through hard patches’.

Similar dominance presently has only been matched by Daniela Ryf. But she is still 4 wins behind.

Bethany is without a doubt one of the most inspiring women in sports. She is truly unstoppable.

A terrifying shark attack at age 13 left her without a left arm. But it did not break her spirit – she refused to be defined by that experience. Instead, she made seemingly impossible – learned to surf using only one hand. Bethany returned to professional surfing several months later and went on to have a very successful career.

And back in 2016 she surfed some of the biggest waves at ‘Jaws’ – what a legend.

Kathrine stood up against the stereotypes and is an inspiration for anyone battling unfairness and adversity. The story of her Boston marathon experience is probably one of the most inspirational sports stories known to the running world.

Kathrine challenged running history by sneaking in and running a prestigious Boston marathon which at the time (1967) was male-only race. She made it happen by signing up using just her initials.

Despite being criticized and pushed off the course Kathrine did finish. And with her achievement she paved the way for other female runners – Boston marathon eventually allowed women to enter the race 5 years later.

Diana’s story is something one can hardly believe in.

After multiple attempts at 64 years of age she became the first woman to swim unassisted from Cuba to Florida. An epic journey of 177 kilometers (110 miles).

Diana’s mindset is truly unbreakable. During the 53 hours that the swim had taken she did not sleep and had to battle through fatigue, strong currents and venomous jellyfish. In fact, most open-water experts concluded that this was not possible without a shark cage.

What makes this story even more inspiring is that before starting the training Diana had not been swimming for 30 years. So, if you ever find yourself thinking it’s too late for something and ready to give up – remember this inspirational sports story. 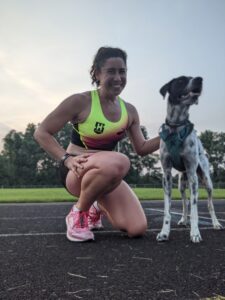